When the neurologist evaluated Bob’s cognitive issues, Bob just cruised through any questions that had to do with math.  He was counting down by 7’s from 100 and was sailing through without a hitch.  I was stuck at 93.

As Bob’s confusion over concepts, words, and names seems to get progressively worse, his obsession with numbers has progressively gotten more obsessive. I think in general people’s idiosyncrasies get magnified with age.  Bob’s have magnified 100 times and then some.

When Bob does laundry, he gives me a full-blown count of what he did—“I just put away 3 pairs of your pants, 4 undies, 3 pairs of socks, and 2 bras”.   You would think that a simple “I put your laundry away” would suffice!  Today Bob told me that he put 3 pairs of my pants in the closet but that there was 1 more in the second load that would be done in 5 minutes.  Good to know!  I’m sort of surprised he didn’t tell me how many steps he took while doing the laundry.

Bob is always on time or early. He never says it 7:00 or 8:00 but tells me that it is exactly 7:01 or 8:06.  He’s precise and gives me the minutes.  If he had a second-hand on his watch, I’m sure he would report the seconds as well as the hour and minutes.  I set my watch purposly to be a few minutes fast and he always corrects me on the time that I say it is!

Bob is crazily fastidious about picking up trees leaves if they fall on our patio or rocked yard areas. When he comes back in the house, he reports “I picked up 28 leaves”.  One time he reported that he picked up 221 leaves.  Who does that?!  If he sees leaves on the patio he’ll state that there are 14 of them and that he has to go pick them up!

Bob can tell you his total golf score for the game and break it down by each hole. Plus he can do the same for Jerry’s, Richard’s, and Ken’s score.  He may not know their names at times but he knows their golf score!  And he gets it right without writing it down.

I’m not sure how many times a day he weighs himself but I get a report with pounds and ounces frequently.  More if he’s lost weight.  Less if he has gained.

Have you ever had your husband report what he eats by the numbers? Bob will report that he had 11 grapes, 1 cookie plus 8 potato chips. I am surprised that I don’t get a breakdown on the ounces of milk he drinks.  Maybe that’s next.

Bob also reports to me how many times he goes to the bathroom during the night but let’s not go there!

As soon as I am up in the morning, Bob is asking me what time I want my alarm set for the following day. If I tell him that I am not sure, he’ll ask me several more times throughout the morning until I give him a time and he can set that alarm.  Not sure if that is a number thing or just a need to be organized and stay in his routine. But I can count on him always setting that alarm.

All I want Bob to count on is me!! 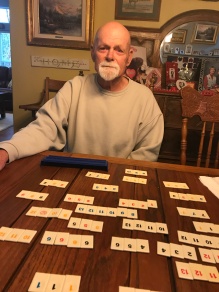 Bob playing Rummikub and beating me!  2018

4 thoughts on “By the Numbers…”